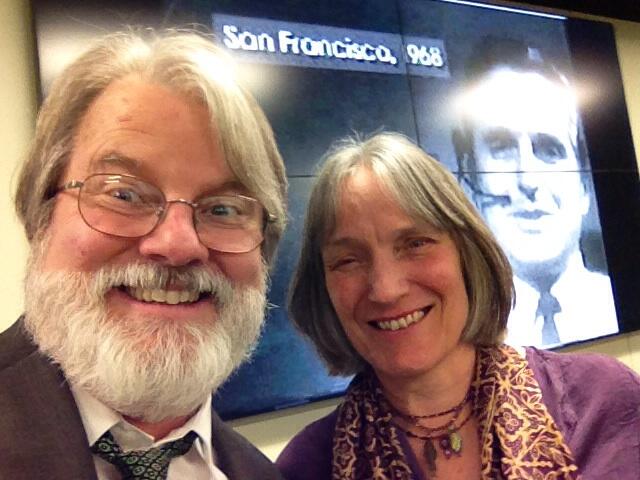 Just returning this week from a wonderful visit with Gardner Campbell and company at Virginia Commonwealth University (VCU) in Richmond, VA, to announce the establishment of an Engelbart Scholar Award at VCU in conjunction with an exciting new MOOC on Research Writing and Focused Inquiry (VCU UNIV200). The MOOC is the brainchild of Dr. Gardner Campbell, Vice Provost for Learning Innovation and Student Success, and Associate Professor of English.

MOOC participants will learn about how the Internet affords a new medium for collaborative research and research writing through studying the visionary research of pioneers of the Information Age, including Doug Engelbart, Ted Nelson, Alan Kay, and others, and will be simultaneously prototyping an open collaborative knowledge environment, including tools inspired by said research visionaries, in which to conduct and capture their creative inquiry. Whereas the typical MOOC is offered in a beamed lecture format, Gardner’s MOOC centers around the students’ engagement and participation as ‘fellow travelers’ on the frontier, forging what he calls ‘trails of wonder, rigorously explored’. So he calls it a cMOOC, for ‘connectivist’ MOOC, where the course venue is a shared blogging, commenting and tweeting space.

The Engelbart Scholar Award will be presented to two qualified VCU students enrolled in the MOOC to include registration in the course and an opportunity of an Internship with the Doug Engelbart Institute.

I especially love Gardner’s description of the course: “The course will be offered for credit for enrolled VCU students and will be open to participation by anyone in the world […] The topic? Well, on the books here the course is a sophomore-level course in research writing: UNIV 200 Inquiry and the Craft of Argument. We’re doing a fully online version that has an official designation as a DIGITAL ENGAGEMENT PILOT and what we hope is the intriguing alternate name of “Living the Dream: Digital Investigation and Unfettered Minds.” The “dream” is the one (are the ones) outlined by Vannevar Bush (“As We May Think“), J. C. R. Licklider (“Man-Computer Symbiosis“), Doug Engelbart (“Augmenting Human Intellect: A Conceptual Framework“), Ted Nelson (“Computer Lib / Dream Machines“), and Alan Kay/Adele Goldberg (“Personal Dynamic Media“). Our goal is to awaken students to these powerful dreams, to invite their engagement with research in the digital age along the lines suggested by these dreams, and empower them to imagine, design, and build inquiry projects that will serve them well both in the academy and beyond.”

Note that UNIV200 has been part of the core curriculum at VCU. Now students have the option of taking it in this unique cMOOC format.

I am so thrilled and honored to be participating with the extended design team for the cMOOC, and proud to be offering the Engelbart Scholar Award in conjunction with the course. See selected photos http://on.fb.me/1nQ4Ygb.

Christina (center) with 2014 Engelbart Scholar Awardees Will and Anisa

Gardner and team are repeating the cMOOC this fall, this time experimenting with the course format – of the six sections offered, two sections will be held entirely online, two will meet weekly in classrooms and participate online, and two will be some hybrid. This year’s Engelbart Scholar Award winners have been announced – congratulations to Ayah Oweis and Marina Green!

A week later Gardner and team presented their pilot project MOOC at the New Media Consortium Summer Conference in June 2014, joined remotely by Christina Engelbart and Will Sullivan, one of our first Engelbart Scholar Award winners. Watch their joint presentation at NMC2014.

By way of welcoming participants in the course, Gardner posted
Our Summer cMOOC: Living the Dreams.